How To Grow Watermelons From Seed

Growing watermelons requires lots of space, lots of sun, lots of water and lots of nutrients.

They are greedy, rambling vines, like all plants in the Cucurbita family (e.g. zucchini, squash, pumpkin, cucumbers...) 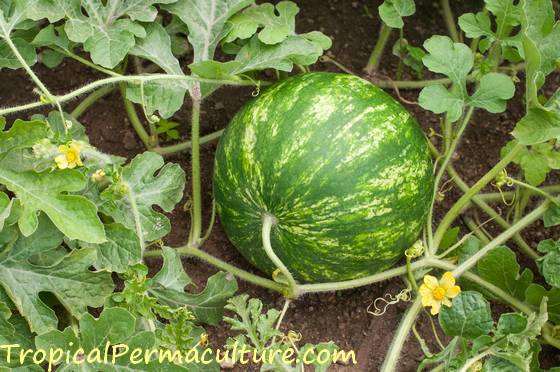 Watermelons are not particularly difficult to grow but because they are so demanding I don't consider watermelons a good plant for beginner gardeners. (You can get lucky if you live in the perfect climate with perfect soil.)

I also don't consider them a good plant for anyone with restricted space, water, or average soils.

You need to put a lot into a watermelon and what you get out in terms of nutrition is little... So from a permaculture point of view watermelons would not be the very first thing to worry about.

But I get too many questions about growing watermelons. They are very popular. So I give in...

How To Grow Watermelons

Where And When Can You Grow Watermelons?

In the true tropics the dry season is the best watermelon growing season.

Watermelons do not cope well with extreme heat or with the humid, soggy conditions of our wet season/summer. Fungal diseases and bugs will wipe them out in no time.

If you live in a cooler climate, then summer is the time to grow watermelons.

You need at least three months of reliably hot, sunny weather to grow and ripen a watermelon. During that time your average daily maximum temperature should be at least about 20-25°C or 70-80°F. Warmer is even better.

There are different watermelon varieties, so if you are at the low end of that, look for a faster maturing variety.

And you need space. As I said, a rambling vine. They like to go wandering and smother everything around them. 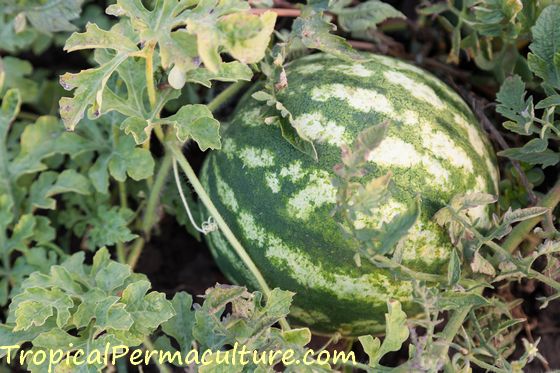 Watermelons are grown from seed. You may be tempted to use seed out of a melon you bought, but don't waste your time. It is almost guaranteed to be a hybrid.

Hybrid varieties are very special crosses that don't grow true to type. You would end up growing what we call pig melons: A melon variety that's only good for feeding to the pigs.

Buy your seed, and if possible buy an open pollinated heirloom variety. Because then you CAN use your own seed next year. The open pollinated varieties are also hardier.

You will find many more interesting varieties amongst the heirlooms than you can find in the standard collection of hybrids at your local gardening centre.

Start your watermelon seeds in the ground, right where they are supposed to grow. The soil should be at least 18°C/65F for them to germinate.

Unless you have an extremely short growing season, do NOT start your watermelon seed in a pot or punnet. Do NOT buy watermelon seedlings from a nursery.

Watermelon seed germinates easily and quickly, within a few days. Watermelon plants outgrow the seedling stage very quickly and they don't like transplanting. You don't save much time and you end up with a weaker plant.

Save yourself this totally needless extra work and stick your seeds in the ground, about two centimetres or an inch deep.

If you have a long growing season, you may want to do several plantings, a few weeks apart.

A mound or ridge is free draining (melons don't like wet feet). If you have heavy clay soil, definitely raise the bed.

Mounds are also good if the soil is as poor as mine. I just make a mound of good soil with lots of compost in it to grow watermelons. Sometimes I plant them in what's left over from a compost pile after I used most of the compost.

If you like growing things in neat rows, or if you want to plant a large area, grow watermelons on ridges, like the commercial growers do.

Rows should be about 2 m/6 ft apart and the plants spaced at 30 cm/a foot apart.

Sow twice as many as you want and keep the stronger seedlings. Just snip off the weaker one.

I prefer growing watermelons in clumps on a mound, in several different locations in the garden. Mixing things up helps keeping pests and diseases at bay. If you want several hills together, keep them about 2 m/6 ft apart.

A mound should be about one metre/three feet square and a foot high. I plant about ten seeds in it, in three groups of three to four seeds each. The groups are spaced about a foot apart (30 cm). 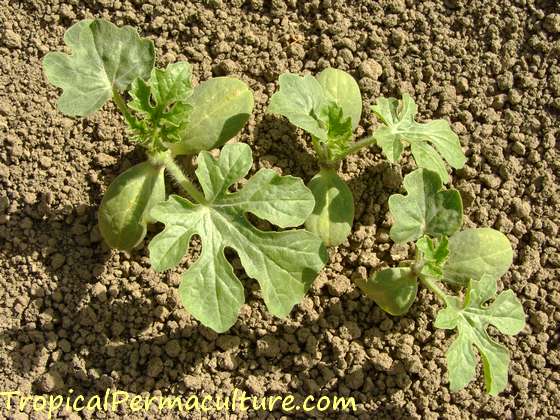 After a few weeks I can see which watermelon plants grow the strongest, and I snip off the weaker ones, leaving only one seedling in each group. Don't pull them up, cut them off. Or you disturb the roots of the others.

If you have a very small garden but absolutely have to have watermelons, you can try growing them on a trellis. Really.

You need a very strong trellis, you need to train them up the trellis because they aren't climbers so won't climb up on their own, and you need to support the developing fruit so the trellis holds the weight, not the plant.

Slugs and other seedling chomping critters like mulch and they like watermelons. So wait until the watermelons have outgrown the most vulnerable stage where a slug can demolish them within minutes. Then mulch the area well.

Watermelons have very shallow roots and they need lots of moisture. The soil should never dry out and mulch helps with that.

Mulch also keeps weeds down. Weeding could disturb the shallow roots, so it's better to not let weeds grow to start with.

Watermelons are VERY hungry plants. If your mulch is something like compost or aged animal manures, all the better. Like all cucurbits, watermelons can handle fairly raw compost and manures.

Otherwise, feed your watermelons regularly with something like pelleted chicken manure or another organic fertiliser. Ideally you should use a high nitrogen fertiliser in the early stages, but cut back on nitrogen and give them lots of potassium once they flower and fruit.

When the vines are about two metres/six feet long, pinch out the tips. It encourages branching.

As your watermelon vines grow bigger they will start trying to take over more space. If they start to smother other things you can remind them about sticking to their area by gently moving the tips of the vines, so they grow into the right direction.

Watermelons grow male and female flowers on the same vine.

The smaller male flowers appear first. The female flowers are larger and you can already see the tiny melon beginning to form at the base of the flower. 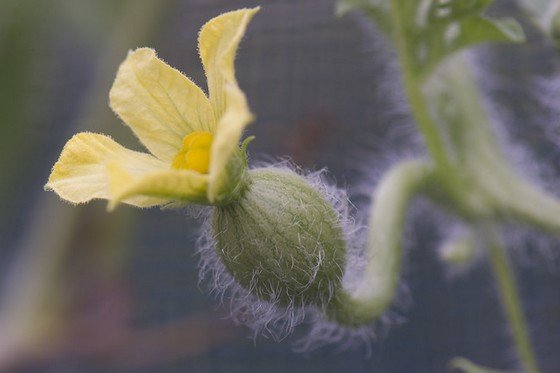 If you don't see female flowers it could have several reasons: too hot, too cold, not enough water, not enough nutrients... In any way, it means the watermelon plant isn't happy.

If the plant does produce female flowers but the little fruit at the base of it shrivels up and dies, then the flowers are not getting pollinated.

Watermelon flowers are insect pollinated. If you suspect the insects aren't doing their job, you can do it yourself, just to be sure.

Hand pollination is best done early in the morning. Pull off several male flowers and remove the flower petals. Then brush the pollen laden stamen against the stigma in the centre of the female flower, so the pollen sticks to it. Easy.

The first few female flowers on each branch will give you the best fruit.

To grow them as large as possible you can pinch out the tip of the branch after several fruits have set (i.e. are starting to swell up).

But this isn't an essential step. You can also just let them go.

Telling when a watermelon is ripe is an art. You will get better at it with practice.

The first sign to look for is the curly tendril at the stem. Once it is dry, as in, totally dry not just starting to dry off, once it is totally dry, your watermelon may be ready. Maybe. 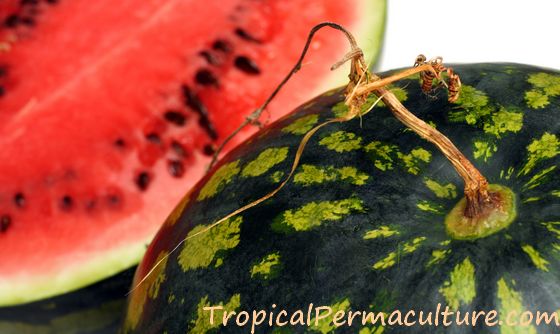 Here the stem and vine is dry, too, already. Can you see the curly tendril though?

Another sign is the light coloured patch on the bottom of the fruit. It is initially greenish, but as the melon ripens the green tinge disappears and it becomes yellowish. The skin overall becomes duller and tougher.

But the most popular way to tell if watermelons are ripe is the sound. Knock them with your knuckles and listen for a dull, hollow sound. The unripe melons have a higher pitched sound. Keep thumping lots of them and comparing until you can tell the difference. Eventually you'll have to take a chance on one...

The only way to get good at this is to grow and harvest lots of watermelons!

The biggest watermelon pests are the leaf eating beetles (they damage the flowers, too) like spotted and striped cucumber beetles, pumpkin beetles with or without dots, whatever you want to call them. 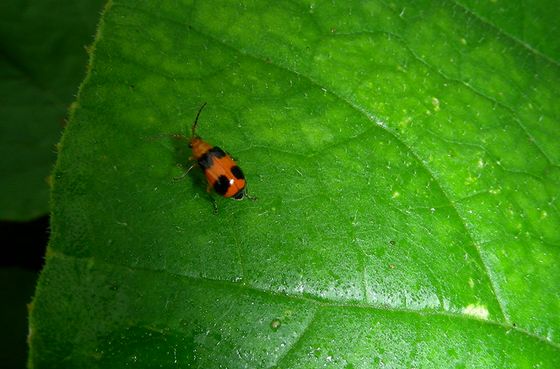 They all look similar and all do the same: they chomp away on your watermelon plants.

However, if they become a real problem it is mainly a sign that your watermelons are stressed.

A healthy watermelon in a balanced environment and in good soil should not attract too many beetles. Also, a watermelon should grow fast enough to cope with a few beetles.

The other main problem with growing watermelons is mildew, a fungus that makes the leaves look as if they were coated with white powder. The fungus thrives in damp, humid conditions.

The best you can do to avoid mildew is to avoid getting the leaves wet. If you can't avoid overhead watering, do it first thing in the morning so the leaves dry quickly. Never wet the leaves in the afternoon or evening.

In the tropics, once the build up for the wet season starts, you probably won't be able to control the beetles or the mildew. And it isn't worth it anyway... The oppressive heat and the humidity just aren't good conditions for growing watermelons. Grow something else that likes humidity and wait for the next dry season to grow watermelons again.