The myth of nitrogen fixing bacteria in vegetable gardens...

How often have you read that nitrogen hungry vegetables,  for example salad greens or the cabbage family, should best be planted in a rotation after peas or beans? The cabbages are supposed to make use of all the nitrogen that the peas and beans have "fixed". 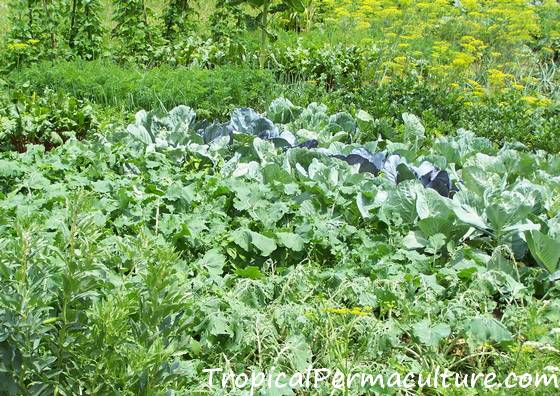 Well, that may or may not work. It depends where you live and what has been growing in your garden the last ten years.

Let's clear up some confusion and make sure that growing nitrogen fixing plants actually works for you.

Nitrogen is one of the most important chemical elements for plants. If there is not enough nitrogen available in the soil plants look pale and their growth is stunted.

Nitrogen fixing plants are called legumes. Legumes - and all peas and beans are legumes - are plants that work together with nitrogen fixing bacteria called rhizobia, to "fix" nitrogen.

Nitrogen from the air diffuses into the ground. The rhizobia chemically convert that nitrogen to make it available for the plant.

Legume plants live in a symbiotic relationship with the nitrogen fixing bacteria - the rhizobia live in nodules in the plant's roots. This way the plant can look after its own nitrogen needs. Nitrogen fertilizer is not required. 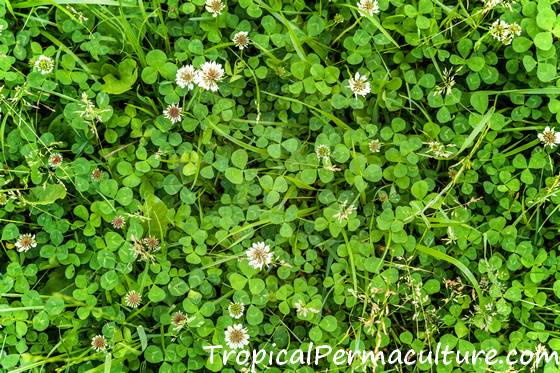 Clover is a well known legume, a nitrogen fixing plant.

In addition, when the crop is harvested and the plant cut back to ground level, the root nodules release all the valuable fixed nitrogen for following crops.

That's the theory. It's great news and all permaculture designs make extensive use of legumes and nitrogen fixing bacteria to increase the nitrogen level in the soil.

However, There Is A Catch

The relationship between the legume plant and the nitrogen fixing rhizobium is highly specialized. There are many rhizobium species, but every plant can only work with one very specific species. Different plants use different rhizobium species.

The rhizobium strain suitable for a certain plant is usually found naturally in the soil where the plant originally developed. After all they developed together.

Well, most of our beans and peas originated in Europe, so if you live in America or Australia you can not expect the required rhizobium to automatically be present in your soil. Most likely it's not, and if it is, then probably not in sufficient numbers. The latter is true in Europe, too.

Just as the plants need the rhizobia, the rhizobia need the plants. So if a plant has not been grown for a long time in a location, don't expect the soil in that location to contain enough of the right rhizobium species.

That means unless you inoculate your seed with the correct species of rhizobium first, you have to fertilize your beans and peas just like any other crop, and growing them makes no difference for the following crop at all.

An inoculant for a legume plant is a matching rhizobium in liquid or powder form. It should come with instructions on how to coat the seeds with it before planting.

Once present in your soil, the rhizobia will happily live there for several years on their own, so if you plant beans again in the same spot a few years later they'll be fine.

Nitrogen fixing bacteria sure are the most cost-efficient and environmentally friendly way to supply nitrogen to your plants.

How Much Nitrogen Is Left Behind For Other Plants?

Nitrogen fixing plants do fix nitrogen because they need it. And they use it. You probably heard that beans, peas, lentils and other pulses are supposedly good for you because they are high in protein. Well, that's where a lot of the nitrogen goes, into the protein rich seeds. 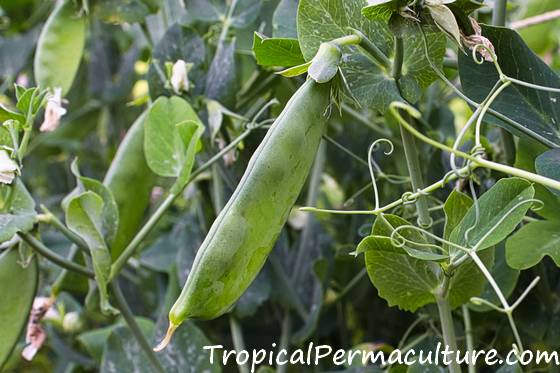 If your legume plants flower and go to seed then most of the nitrogen that the bacteria fixed is tied up in the plant. Some of it you eat, the rest hopefully ends up on your compost. But precious little actually remains in the soil.

If you want nitrogen fixing plants to benefit other plants the best way is to grow them as "green manures". Grow them until they are about to flower, then cut them and work them into the soil.
If you let them go to flower and seed be aware that most of the nitrogen is now in the plant. Use it for mulch or compost.

There's one more option, I like to call it the permaculture option. There are many native legumes, trees, shrubs and other kinds. Since nobody ever fertilized them they had to make do by themselves, so they developed relationships with rhizobia.

If you grow a legume that's native to your area, the required nitrogen fixing bacteria will be present in your soil.

Use the natives as a cover crop, as an in between crop (talking both time and space here), get creative and find ways to incorporate them into your permaculture garden design. Slash or prune them regularly and use the nitrogen rich prunings as mulch.

Native nitrogen fixing plants usually don't need looking after, they just spent thousands of years adapting themselves to your particular soil and climate.

As they grow they work for you, by converting the nitrogen in the air into nitrogen for your plants. No need to buy inoculant, no need to buy fertilizer, and no need to spread it. Sounds like a good deal to me.

For the sake of completeness I should mention that there are other nitrogen fixing bacteria as well. They live in the soil independently of plants, and they also fix nitrogen from the air.