Learn How To Grow Ginger At Home

When I started growing ginger root I expected it to be difficult. It's not.

I've been growing ginger at home for years, and ginger would have to be a serious contender for the title "most neglected plant" in my garden.

I look at my ginger plants exactly once a year, at harvest time. I harvest them, replant them, and then forget about them for another year. 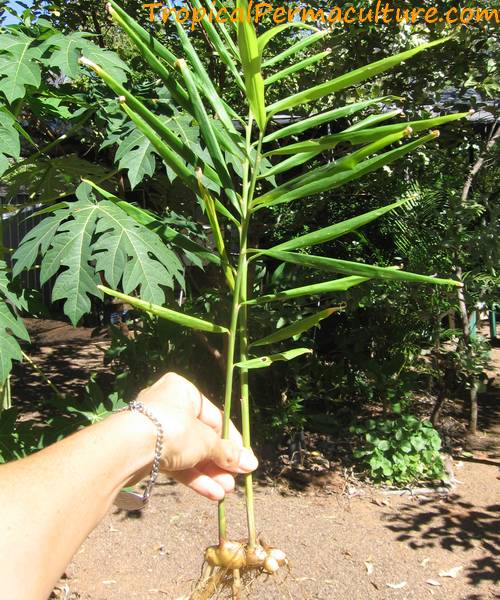 I easily grow a year's supply of ginger root from them. I also have plenty left over to give away, both ginger root planting material and ginger for eating.

You can get started using store bought ginger root. And you can easily grow ginger in pots or tubs, so growing ginger indoors is a possibility in cooler climates.

On this page I tell you everything you need to know about growing ginger, so you can grow your own fresh ginger, too.

Growing Ginger Root Is Not That Hard...

...provided you get a few basics right. Let's first look at some pictures of ginger plants and the roots: 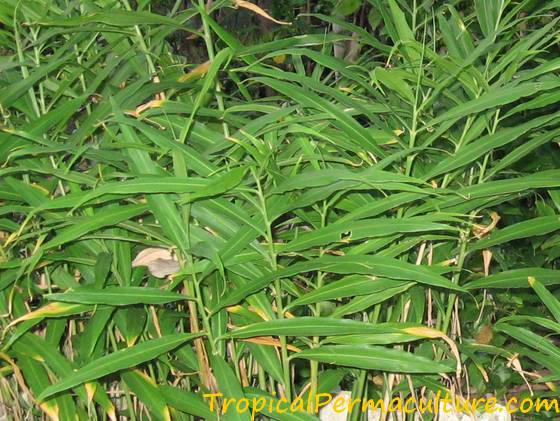 The picture above shows the foliage of ginger plants. Below you see a ginger rhizome. 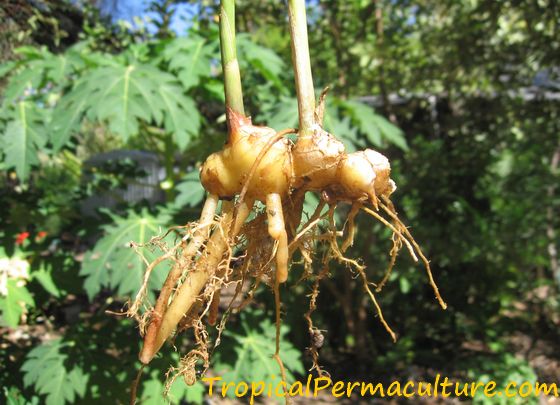 We usually say ginger root when talking about the edible part of the ginger plant. But that is not really correct. You eat the rhizomes, and as you can see, the rhizomes have roots. Rhizomes and roots are two different things.

But I'll keep talking about ginger root anyway, that's what everybody does and you know what I mean.

Ginger Flowers are edible too!

by reader Jo Kuah from the UK

"I just wanted to point out that the ginger flower is edible. I'm originally from Malaysia and we use the flower to flavour stocks and curries in our dishes.

Just cut away the hard petals and eat the bud itself. Make sure to blend it or chop really finely as the plant is very hard, and could be uncomfortable to swallow, but it lends this beautiful high note to your spicy/sour base dishes that is unattainable from any other ingredient.

If you're interested in hunting for some ginger flower recipes look for Asam Laksa or Asam Fish.
The Malaysian word for Ginger Flower is Bunga Kantan."

Ginger loves a sheltered spot, filtered sunlight, warm weather, humidity, and rich, moist soil. (What else did you expect from a tropical plant?)

The easiest way to get started growing ginger root is to get a few fresh rhizomes of someone who does grow ginger, at the time when the plant re-shoots anyway (early spring). Otherwise just buy some at the shops at that time.

Look for pieces with well developed "eyes" or growth buds. The buds look like little horns at the end of a piece or "finger".

Some people recommend to soak the rhizomes in water over night. That's not a bad idea, since shop bought ginger might have been treated with a growth retardant.

I also read the advice to sit rhizomes in water until they sprout roots. That's nonsense. Your ginger plant will be much happier if the roots are in the ground and can breathe right from the start, rather than having to deal with the transplanting shock and the change in conditions. If the ground is moist and warm they will root very easily.

Whether you grow your ginger root in a pot or in the ground, you do need really good soil to start with. It needs to be rich enough to feed your ginger (you can always add some fertiliser, see below), it needs to hold enough moisture so it doesn't dry out, but it needs to be free draining so the ginger roots don't become water logged.

Good compost is of course ideal. I use a mix of one part of my best compost with one part of my sandy garden soil. The compost supplies the nutrition and holds water, and the sand/loam makes sure the mix drains freely.

If your garden has reasonable soil just dig in some compost and that should be good enough. If your soil is too heavy you can make a raised bed or a small hill or ridge to improve drainage.

The best planting time is late winter/early spring (late dry season/early wet season in the true tropics). Make sure you select a spot where the plants get plenty of light but no direct sun, and where they are protected from wind.

You can cut or break up the ginger rhizomes in little pieces with a couple of growing buds each. Or just plant the whole thing. Plant your ginger root five to ten cm/2-4 inches deep, with the growing buds facing up.

How Much Space Does Ginger Need?

Growing ginger doesn't take up much room at all. Every rhizome you plant will first only grow a few leaves, in the one spot. Over time it will become a dense clump and very slowly get bigger, but only if it isn't harvested.

The rhizomes underground also don't seem to mind if they become a bit crowded.

Ginger only grows to about two to three feet/60-90cm in height.

A 14 inch pot easily holds three average rhizomes, a rectangular styrofoam box holds about nine to a dozen. If planting them in the ground plant them about 15-20 cm/six to eight inches apart. And if you want to plant a whole hectare order 1000 - 1500 kg.  :-)

How Much Water Does Ginger Need?

Ginger needs a lot of moisture while actively growing. The soil should never dry out. Don't overwater, though, because the water that drains away will take nutrients with it.

Ginger loves humidity. If you have problems with dry air then regular spraying and misting might help. Dry air can cause problems with spider mites. But that's rather a problem for people who try to grow ginger out of its range and indoors. A sheltered, moist spot in a warm climate will provide enough humidity.

If you are growing ginger in the ground mulch it thickly. 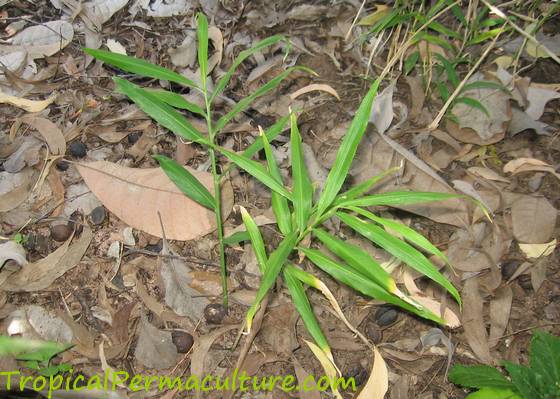 It helps to keep the ground moist, it helps feed the ginger as the mulch breaks down, and it also keeps down weeds.

Ginger is a slow growing plant and easily overgrown by others.

Towards the end of summer/wet season, as the weather starts cooling down, your ginger will start to die back. Reduce the water, even let the ground dry out. This encourages the ginger to form rhizomes. Once all the leaves have died down your ginger is ready for harvest.

How Much And Which Plant Food?

If you are growing ginger in good, rich soil it shouldn't need anything extra. I grow mine in tubs. I put in fresh compost mix every year and never add any extra fertiliser.

Work in some organic slow release fertiliser at planting time. After that you can use some liquid fertiliser like seaweed extract or fish fertiliser every few weeks.

When To Harvest Ginger Root?

If you are growing ginger root in the garden you can start stealing little bits of it once it is about four months old. Just dig carefully at the side of a clump. 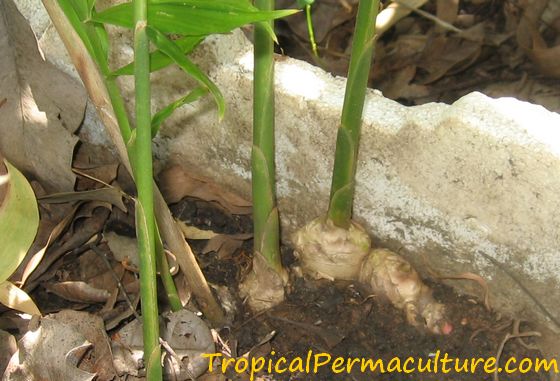 But be aware that this "green ginger" does have a lot less flavour than the mature stuff.

The best time to harvest ginger is any time after the leaves have died down. Usually it takes eight to ten months to get to that point.

You can now dig up the whole plant. The reason that I grow my ginger in tubs is that it makes the harvest so easy. I don't have to dig, I just tip out the whole thing. 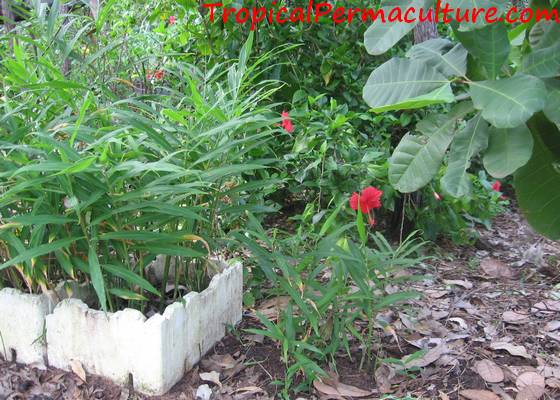 My ginger grows in stryrofoam tubs. (And next to them.)

Break up the rhizomes, select a few nice ones with good growing buds for replanting (you can replant them straight away), and keep the rest for the kitchen.

I simply peel, chop and freeze the whole lot. An even better way is to cut it into small chunks and store it in brandy. Brandied ginger keeps like fresh. Thank you to reader Jan Stevenson for this tip.

The rhizomes that have been replanted or left in the ground don't need any water or attention until the weather warms up again. Mine still get watered where they are (other plants in the area need it), and that doesn't seem to hurt them either.

The other way to grow and harvest ginger is to have many clumps growing around your place, and to just dig up what you need, when you need it. The plants grow outwards from the mature rhizomes. Once a clump is big enough you can harvest the mature tubers from the middle without damaging new shoots.

By the way, if you are serious about growing ginger at home then resist the urge to harvest it for a year or two. Rather build up a good resource stock first. I started with one little rhizome and dug it up the first time after two years. I replanted every single promising looking bud and still had some to eat. Next year I did the same, and after that I always harvested enough to last me the whole year.

When Does Ginger Flower?

When growing ginger as outlined above you won't see any flowers. A clump needs to be about two years old to flower. So if you want to see your ginger flower leave it in the ground, and just dig very carefully at it to harvest bits here and there.

The flowers of culinary ginger are green and insignificant anyway.

There are however some spectacular flowering gingers. If you are after great flowers get some of those. They are grown exactly like the culinary ginger, just skip the harvest.
(Mind you, many of the flowering gingers are edible, too. They just don't taste nice.)

There's also a pretty variegated ginger with white and green striped leaves. All the ornamental ginger varieties are evergreen in the tropics, meaning they don't die down like the culinary ginger.

A Few Final Notes For People In Cool Climates

Don't expect to be harvesting much of your ginger plants. You'll be growing ginger mostly as an ornamental plant. It is a really pretty plant with its glossy strap leaves and it smells beautifully when you brush against it.

Start your ginger indoors, it will be too cold outside in spring. Don't worry about the dappled sunlight. In your parts of the world the sun isn't as intense. Your ginger should be able to handle it and it needs all the warmth it can get.

You may or may not be able to keep it alive over winter, depending on where you are. Definitely move it inside at the first signs of cold weather. Once the leaves die back keep it reasonably dry and cool or the tubers will rot, and with a bit of luck your ginger may grow back next year.

Ideas, tips and tricks for growing ginger in a permaculture garden.