My Secret For Growing Passionfruit Is Simple: Permaculture

I discovered how to successfully grow passionfruit quite by accident, simply by applying permaculture design principles. The results were impressive!

(This page assumes that you are already familiar with the basics of growing passionfruit and with the main permaculture design principles.)

Unless you are brand new to this site you already know that I'm lazy. What I love best about permaculture is the mantra to let nature do the work.

I wanted to grow passionfruit.

They told me that you can't grow passionfruit here -- "The climate is too harsh, the soil is too poor, the termites will eat them, a wilt disease or the nematodes will get them..." -- but that of course did not stop me from trying.

I got hold of some passionfruit, both a yellow and a purple one. I ate them, and planted some seeds. To my surprise all of them came up. So here I was with a bunch of passionfruit plants and no trellis.

Of course I don't spend money and time on building trellises. Plants can climb up other plants, right? That's what climbing plants do in the rainforest.

So off I went wandering through my garden to look for trees to plant my passionfruit next to, and in they went. I planted two of them under wattle trees (acacias), some under other trees, and two went next to veranda posts. 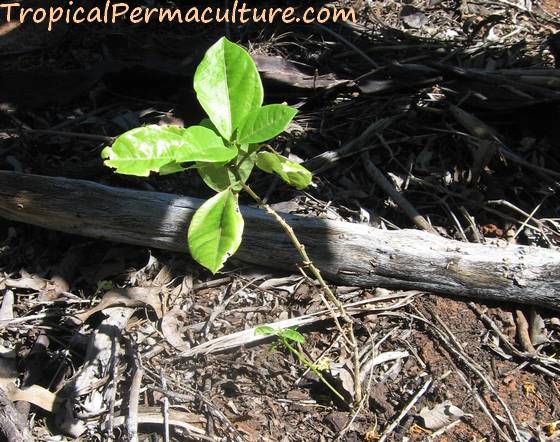 All passionfruit plants grew. Most of them managed to get up into the tree (or up the post), produced a handful of fruit (or not, the ones at the veranda didn't), and after that they unspectacularly died, just as everybody had predicted.

The two plants under the wattles managed to climb up into the tree... 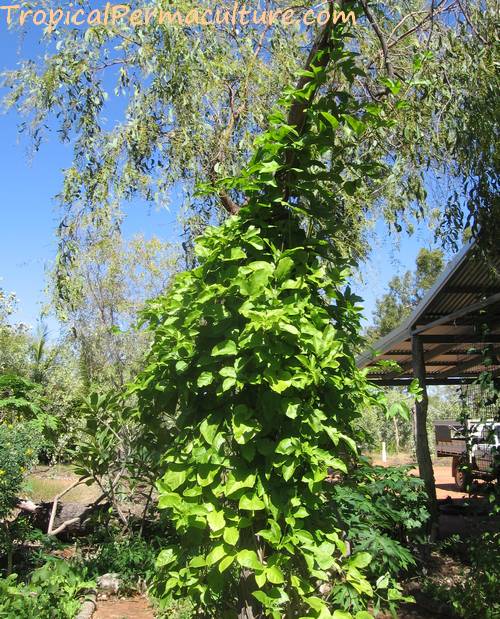 ...and then kind of exploded. They burst into fresh growth and flowers, they rained fruit, they kept climbing over neighbouring trees, from crown to crown to crown, they were unstoppable. 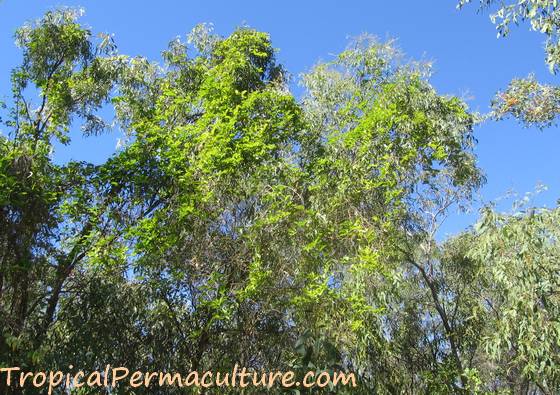 At the end of the fruiting season I hacked them back because they were about to smother and kill some pretty big trees.

Next year the whole spectacle repeated itself, and the year after as well. Then the wattles died. That was ok. Wattles are short lived trees, and those two had been past their prime already. That's why I had selected them in the first place.

I tried to train the passionfruit up another tree, but they died shortly after. That was not a problem either, because by then I had already done some thinking, drawn some conclusions, and I had already planted two new seedling vines under other wattle trees.

Here's why it works:

Wattles are legume trees. Their roots live in a symbiotic relationship with nitrogen fixing bacteria. (The bacteria live in nodules in the roots.) If a legume plant dies, or is cut back or pruned, then the roots release nitrogen from the nodules.

As the passionfruit reaches the top of the wattle it starts shading leaves and branches, which the wattle tree will drop. That's a bit like pruning, and the wattle responds by shedding nodules.

The nitrogen feeds the passionfruit, which grows, shades out more of the wattle, which release more nitrogen etc. Self serve nitrogen. It's too good. I don't need to do anything.

In fact, the passionfruit performs a valuable task in capturing the released nitrogen. An old wattle gradually dies back, slowly, over a few years. In that time it naturally releases a lot of nitrogen. If it is not utilised by other plants it can leach away in the next rain. What a waste.

The passionfruit turns the nitrogen into masses of leaves that you can turn into compost when pruning, or into mulch as they fall. Always keep recycling your soil fertility. Things need to go round and round and round. That's what makes your garden grow.

But the nitrogen is not the only reason that the passionfruit is growing so happily.

All plant roots live together with lots of beneficial fungi and bacteria. The microbes and the plants benefit each other. Microbes extract nutrients from the soil and help plants to absorb them. Plant roots release sugars to feed the microbes.

If a soil is full of beneficial bacteria and fungi, then the bad microbes that cause plant diseases have a hard time.

An established wattle tree with a healthy root system has stimulated lots of beneficial soil organisms in that area. The steady leaf fall has mulched the surface, there is more organic matter, more moisture etc.

Nothing is as good for soil as growing something in it. Growing perennial plants is even more beneficial for soil than adding compost. (And a lot less work, if I may mention that aspect again.)

Soil under a fence is likely pretty dead. Well, in my part of the world it sure is. Soil under a wattle is full of life. So, you plant your passionfruit into a healthy bit of soil full of life. Of course it loves it! Healthy, living soil is the most crucial component for any plants at risk from root diseases.

Most wattles are not very competitive trees, they are happy to share their place with other plants. Not like gum trees (eucalypts), which do their best to stop anything else but gum trees from growing.

Wattles don't have a dense canopy. The passionfruit gets enough light, even before reaching the top.

Most wattles are also very short lived trees. Yes, they suffer supporting the passionfruit, no doubt. But that is the role that wattles have in nature, to improve the soil and then make room for others. That's why they are naturally short lived. And since passionfruits are short lived, too, it's a match made in heaven.

Wattles and passionfruit are the perfect companions.